Sometimes in the hustle and bustle of a virtual world, you need to get away from it all.  There are several ways to do this, there are lots of nature-themed sims in Second Life that come complete with boating opportunities and nature trails.  Personally, I chose to ride my horse, Shade.

There are lots of breedable options for horses in Second Life, but Shade isn't breedable.  Shade is an Animesh rideable horse brought to you by WaterHorse.  WaterHorse offers two different kinds of ridable horses,  Bento and Animesh.  I went with the Animesh as I like to just watch them walk around my property.  The Bento is just attached to you to and you ride it.  You can do the same with the Animesh if you're on a sim where you don't have rezzing rights. 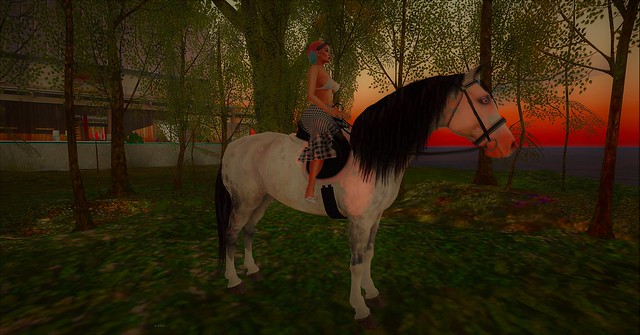 There is also a pretty cool customization HUD so you can alter your horse's appearance.  The horses are loaded with cool animations so you'll pretty similar to actually riding the horses..  just without the cleaning stalls or hay fever.

One thing I think is super cool about Second Life is that it allows you the freedom to explore some of your darker inclinations from the safety of your favorite pair of flannel pajamas.  I have a long history of playing demon characters.  I don't know where it came from, its just a thing really.  Recently I found a new demon themed sim on Second Life called Pandemonium.

It has a great design to it, frankly, it is pretty amazing. to look at, all be it a little constricted from what I've seen. What's even better is that it is seemingly constantly full of RPers.  One demoness who I saw, I specifically messaged to tell her how much I loved her avi and she just ignored me, I'm not sure if that was RP or just basic rudeness.  If you go, don't expect a lot of general chit chat, or breaking into OOC, because it won't happen.  It all adds to the atmosphere of the place in the end, but if it isn't something you're used to then it will annoy you. Cliques don't just happen in the RL folks.

When you arrive at the sim, you walk through a welcome area where you decide if you are a demon or a human, that decision will determine where you end up when you enter the hell-pit.  The hell pit, by the way, is a literal pit that has rows of dragon skulls which double as cuddle and "recreational" areas.  Nearer to the center are a few strip poles, some more seating and various torture devices.  There seemed to be a few lounging areas hidden around, but most of the action is in the pit.  My plan was to take a few pictures, but even if I derender everyone I'm still going to feel like I am being invasive.   For now, you just get pictures of me and if I end up lucking out and finding a time no one is around, I'll add them to this post or my Flickr. 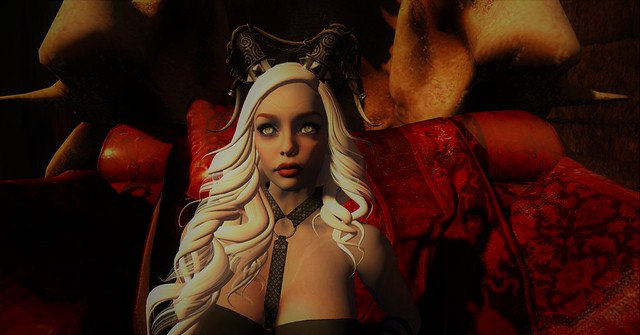 Day at the Lake

It is the height of summer where I'm at and cute swimsuits are all over Second Life.  Naturally, I decided that our first fashion post would be over some swimwear.  It is also one of the picks from Fifty Linden Fridays, so score one for cohesion! 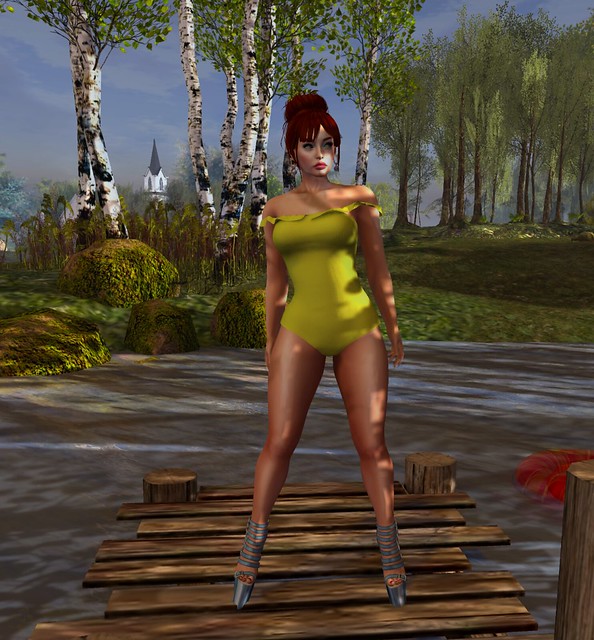 This bathing suit is from Stories&Co. and is called Vera in the color slime.  I really like the feminine ruffle across the arms and bust line.  The mesh wasn't broken at all and it is a good fit for the Maitreya body.  There are other colors available, they had the Slime and an Orange one, but as I go with the red hair lately, the green looked better.

The shoes are an old standby of mine from Chic & Shoes called Thousand Straps. Included with the shoes (available for Slink, Belleza, Maitreya, N-Core, and TMP) you get a HUD with several color options for the shoes as well as the metal.   I walked around the shop looking for them, but I don't see them, so no idea how much I paid, probably around 150L.

My hair is from is Suki from Wasabi Pills.  It is a cute messy top bun, that seems appropriate for some potential lake-side partying.

Now, I'm going to take a dip in the pool!

I know in yesterday's post I said I would do a fashion blog tonight, and to be honest, I really intended on it.  I even put on a new fancy ass dress from R.icelli with plans of showing off some outfits I got from there yesterday.  What happened though was I got distracted by taking better photos in Second LIfe.

Strawberry Singh has some really great tutorials on the subject and I was following her directions, and then my computer crashed, which of course means I had to start all over.  By the time it came around to time to edit my videos I really just wanted to get through it as quickly as possible so I used the Windows tools that are already in my photo editor.  I hope you don't mind.  I'm still learning about this, but I am really trying.  I think in a few months it will be interesting to see my progress.

Anyway, for grins, I posted a few of the pictures I was playing around with tonight on my Flickr so I'll share them here as well.

Shopping is a big part of my Second Life experience. At some point, a few years ago, I discovered the group, Fifty Linden Fridays and ever since then, I try to make a point to pop in on Thursday evening to get the list for shops that will participate in the event.

The USD and Linden exchange rate is about 250L for every dollar. So, FLF is kind of a great deal.

It might seem like this event would have some barely known shops taking part, and that's true sometimes, which makes it a great way to get to know a shop you may not otherwise have a way to know about. It isn't just fashion, they have home decor items as well that are pretty cool and unique.

I'm still going through the list, the event doesn't start until 12am SLT, but I won't be able to make it to get all of the places before I go to sleep as I am two hours behind of SLT, so I'll have to hit it up tomorrow, which means..... tomorrow we'll have our first fashion blog!

I was feeling a little spacey tonight, so I thought I'd check out a space-themed sim. I don't tend to go to overly populated places so I just searched in the SL viewer's search and selected a place with an interesting name and went with Labyrinth Space Station.

The description led me to believe that this place would have some light RP opportunities and it had enough traffic that you'd expect a few folks to be hanging about. When you first tp in you are in a small room with two hallways. I chose one, for no particular reason, and ended up in an empty bar/strip club. The decor was cute, kind of matched my pink and black theme for the evening, but nothing overly calling that it was on a space station other than walking down the hall there are planets and stars in the distance.

I walked down the other hallway which led to a shop rental area. The prices are super reasonable, 50L for 100 prims. I am not sure if that is in an effort to get more traffic. The majority of the shops were empty, save one that had some anime portraits. There were some windows that gave you a better view of space. There is a stairway that goes to a viewing area with a hookah so you and your friends can chat and virtual hookah.

Should you go, there appears to be a large window in the shop area, it isn't a window, its an opening and when you fall through flying is not enabled here so you pretty much fall to their building area and are stuck.

The description also says that this place is hiring, so I am going to work with the assumption that they are working on creating it now and will be adding more things in the future.   I hope they do, I really like the idea of a cool space station hang out spot.